These incredible before and after pictures show the true horror and heroism of a day that changed the world 72 years ago. On June 6, 1944, Allied soldiers descended on the beaches of Normandy for D-Day, in an operation that marked the beginning of the end of a devastating six-year conflict and the eventual victory over Nazi Germany in World War Two. In a mission described by wartime Prime Minister Winston Churchill as “undoubtedly the most complicated and difficult that has ever taken place”, D-Day was the beginning of an 80-day campaign to liberate the region which involved three million troops and cost 250,000 lives. Few are left to tell the story of the D-Day landings, but today, as we remember the sacrifices and heroism of troops involved in the landings, these pictures of tourists soaking up the sun on Normandy’s beaches stand in stark contrast to haunting images taken around the time of the crucial invasion. 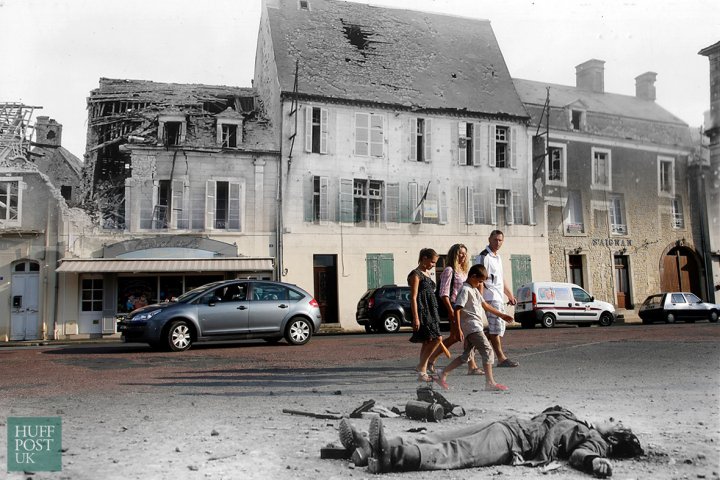 Tourists walk by where the body of a dead German soldier once lay in the main square of Place Du Marche in Trevieres after the town was taken by US troops who landed at nearby Omaha Beach in 1944.

DEZE PAGINA IS UNDER CONSTRUCTION 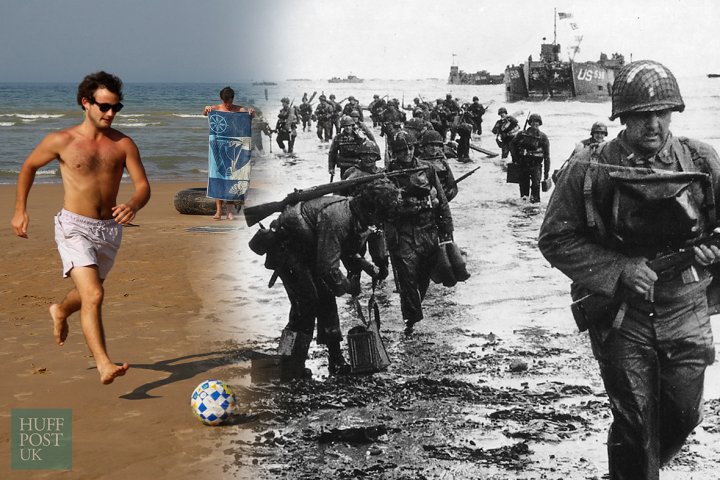 Holidaymakers enjoy the sunshine, while on June 6, 1944 US reinforcements landed on Omaha beach
during the Normandy D-Day landings near Vierville sur Mer, France. 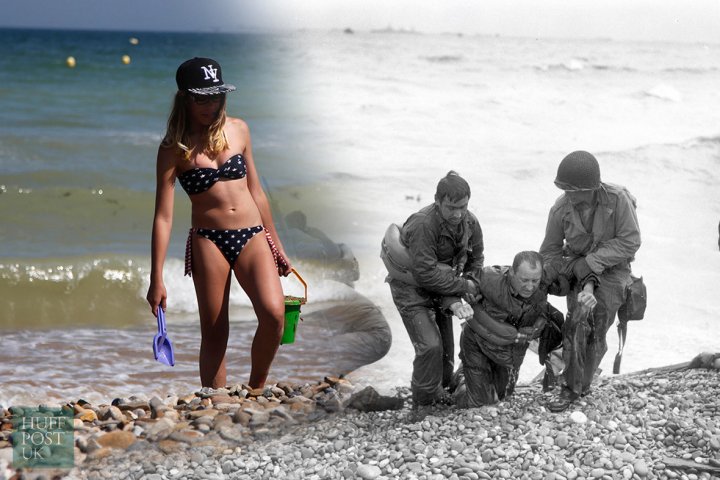 Tourists top up their tans where the members of an American landing party once assisted troops whose
landing craft was sunk by enemy fire off Omaha beach in 1944.

Where US Army reinforcements once marched on June 18, 1944, tourists now tread the same path to
the beach near Colleville sur Mer, France. 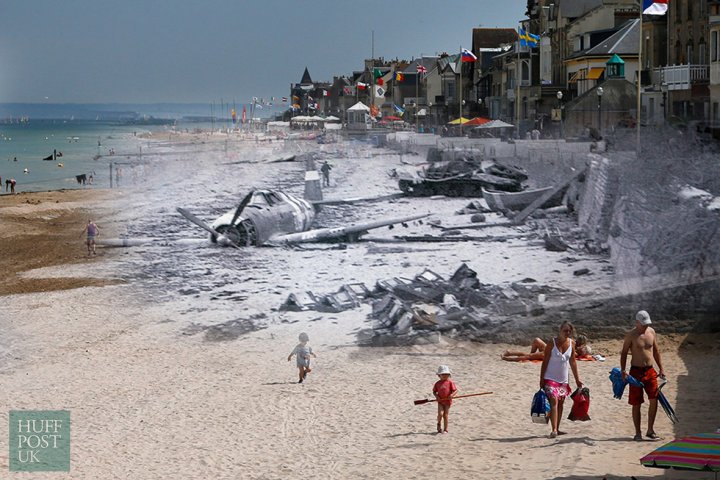 The former Juno Beach D-Day landing zone, where Canadian forces once came ashore, in Saint-Aubin-sur-Mer, France. Once a scene of death and destruction, now a tourist’s paradise. 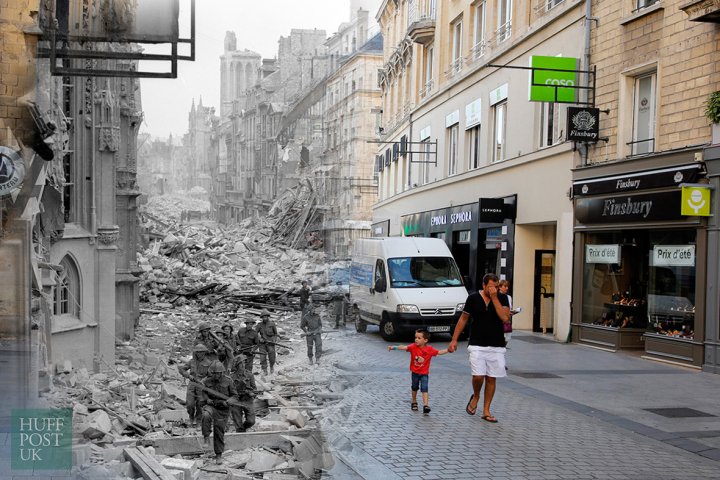 Where Canadian troops once patrolled in 1944 after German forces were dislodged from Caen, shoppers now walk along the rebuilt Rue Saint-Pierre in Caen, which was destroyed following the D-Day landings. 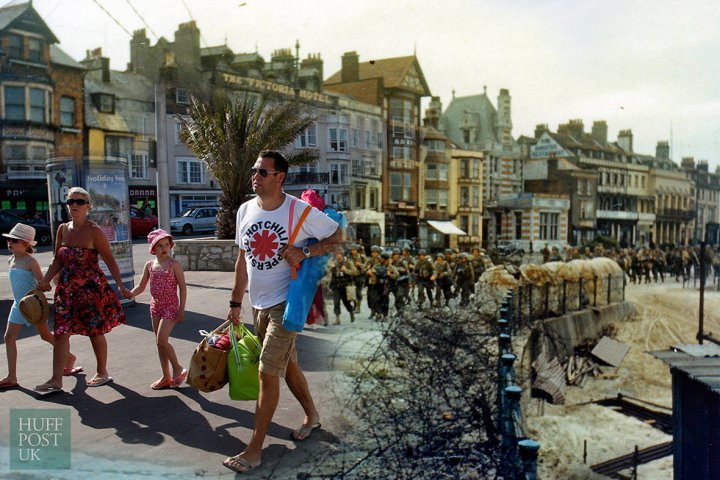 In 2014, tourists stroll by where the 2nd Battalion US Army Rangers once marched to their landing craft
in Weymouth, England June 5, 1944. 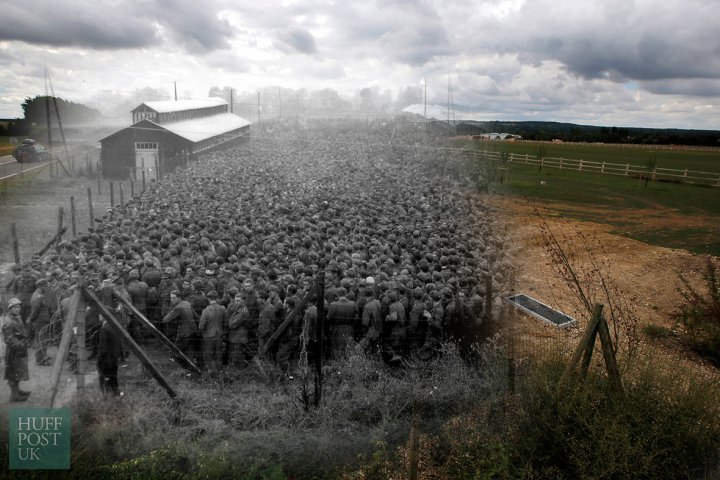 A farm field remains where German prisoners of war, captured after the D-Day landings in Normandy
were once guarded by US troops at a camp in Nonant-le-Pin, France. 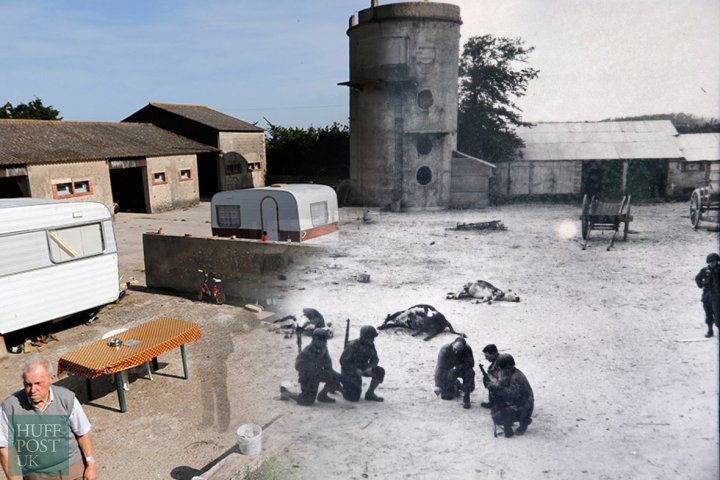 Farmer Raymond Bertot, who was 19 when allied troops came ashore in 1944, stands where US Army troops once made battle plans on his property near the former D-Day landing zone of Utah Beach in Les Dunes de Varreville. 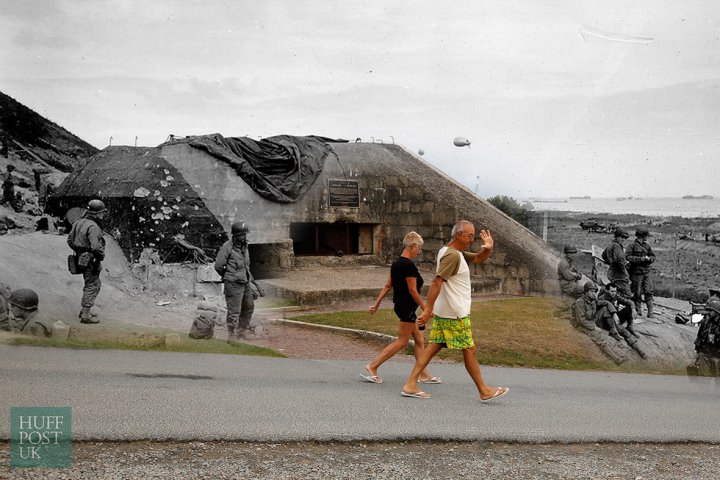